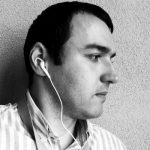 Atanas Shinikov, an Arabist, scholar of Islam, and Arabic calligraphy enthusiast from Bulgaria since 1998. Back then, in the long autumn nights, while sweating over learning the Arabic alphabet [O, God, who can  ever write with this!], penning down my first alif with a clumsy self made metal nib, I had no idea what part of me these letters would eventually become. Then came my first Arabic New Testament, which somehow tied calligraphy and Scripture hand in hand for the years to come.

My travel to Syria in 2001 – remember seeing on TV the twin towers collapse on 9/11, days after that I took the bus to Damascus – proved crucial for my calligraphy practice. Besides being able to make field contacts with people from the craft, I set up an exhibition of my works in the Bulgarian Cultural Center there; there I managed to secure supplies and calligraphy manuals for years on.

Through all of those years, most often my calligraphy pieces have been designed as gifts to my precious ones. Yet this site started as a crystallization of the need to provide a sustainability push and visibility to my present and future calligraphy projects.

I consider my favorite scripts Thuluth (after all, I entertained authoring a whole M.A. thesis in 2005 on this script), Muhaqqaq, Naskh and Farisi within the genres of small calligraphy pieces of (qit’a) and small calligraphy panels (lawha-s). I find my inspiration among the classics: the somehow marginally outstanding Ahmet Karahisari (d. 1566), Mustafa Rakim (d. 1826) and Abdulazis al-Rifai of the 19th-early 20th century. Hashim Muhammad (d. 1973) from Baghdad cannot be omitted from the list, having authored the first manual I ever came upon. I myself being a calligraphy autodidact, it is worth mentioning another self-taught calligrapher of the Ottoman Empire: Mahmud Celaleddin (d. 1829), whose work I can always contemplate.

As an Arabist, I have published academic translations of Arabic calligraphy sources into Bulgarian, most notably portions from the classical work of al-Qalqashandi’s (d. 1418) Subh al-A ‘sha. My latest calligraphy project has been the overall Arabic letterings, calligraphy, documentation translation and design for a cinema production within the NuBoyana film studios in Sofia, June-July 2017.

In case you’d like to know why most of the texts I choose, are from the Bible, take a look here.